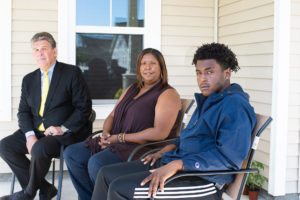 Two white men, one who is a former sheriff, are demand apologies from the Black family they violated.

Monica and Dameon Shepard, a mother and her son, experienced harassment from former Deputy Jordan Kita of the New Hanover Sheriff’s Office, Robert Austin Wood, and “a gang of white thugs,” The Root reported.

On May 3, 2020, in North Carolina, Kit-a, Wood, and 13 others were looking for a missing girl and felt entitled to trespass on the Shepard residence.

Dameon, 18 at the time, and Monica had no involvement with the girl’s disappearance and the tipster sent the armed mob to the wrong address.

The group did not find the missing girl they sought but they did find themselves in legal hot water. Kita and Wood were charged with trespassing and breaking and entering, among other crimes.

Kita was fired on May 8 once the story went viral that armed men tried to break into a Black home. It was reported by The Root that Kita physically prevented the Shepards from closing their door.

“I’ve said this before: It’s about accountability,” Monica Shepard told CNN. “You can’t just form a mob and go around being vigilante citizens. There’s laws against that. I’m not interested in sitting down. It’s all about accountability at the end of the day.”

Kita and Wood are being labeled as white supremacists and blame the Shepard family and their lawyers for that characterization.

After being acquitted, the men feel the Shepards and their legal team have mIs characterized them.

“Lawyers for the two men say they not only want the families to come together and sort out what they believe is a misunderstanding, but their clients also want an apology from Monica Shepard and her teen son, Dameon, as well as from their family’s lawyers, for comments they feel painted their clients as racists,” CNN reported.