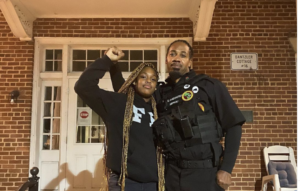 A Newark anti-violence activist has confirmed the news that no parent wants to hear. His 15-year-old daughter, Sanaa Amenhotep’s body, was found after a three-week search in South Carolina.

According to the Lexington Sheriff’s Department, the teen’s body was discovered in a wooded area on Thursday. An investigation into her murder is underway.

“#DEVELOPING: A death investigation related to an @RCSD kidnapping case is underway in Lexington County. No arrests have been made, although we have interviewed some persons of interest. #MORE: We’re sharing information with Richland County deputies and the Lexington County Coroner’s Office as part of our continuing work on the case,” the department shared on Twitter on April 29.

#DEVELOPING: A death investigation related to an @RCSD kidnapping case is underway in Lexington County. No arrests have been made, although we have interviewed some persons of interest. 1/2 pic.twitter.com/OcXmfOL3tb

Sanaa’s father is Sharif Malik Amenhotep, a prominent member of the Brick City Peace Collective in Newark, New Jersey. A  $10,000 reward had been offered for the girl’s safe return.

Sanaa was last seen leaving her Columbia, South Carolina home on April 5, with a teenaged girl and two males, News 10 reported. Police believe the activist’s daughter was held against her will and subsequently murdered around the same time she went missing. They alleged her body had been on the scene for an extended time.

“I can’t imagine what the family is going through,” she said as she fought back tears. “It was a very difficult scene for our office. We stayed most of the night processing and taking care of the family. Taking care of Sanaa.”

According to NJ.com, Newark Mayor Ras Baraka extended his condolences to the Amenhotep family as well.

“On behalf of the people of Newark, I would like to express my sincere condolences to Sharif Malik Amenhotep on the tragic loss of his beautiful and intelligent Black daughter, Sanaa Amenhotep, who was kidnapped and murdered in South Carolina,” he expressed.

“Mr. Amenhotep works tirelessly to increase justice and reduce violence in our neighborhoods through our Brick City Peace Collective, helping us to reimagine public safety and prevent tragedies such as this from taking place in our very own community,” Baraka continued. “No parent should ever have to bury their child. It is an inexplicable loss that defies imagination.

“We hope that the South Carolina authorities can bring the suspects in this case to justice. Our entire city is joining with the Amenhotep family in their grief and pain.”

Sanaa’s father used social media to appeal to the public for her safe return.

On May 1, News 10 reported that an autopsy report concluded that Sanaa’s cause of death was a gunshot to the back of the head. Three people, including two juveniles, are now in police custody.

Treveon Nelson and the two minors have been charged with murder, kidnapping, criminal conspiracy, and weapon possession during a violent crime. The trio were alleged friends of the young teen.