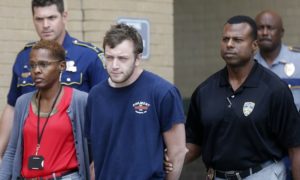 A Louisiana Nazi sympathizer has been sentenced to life in prison starting August 26, for hunting and killing Black people in 2017.

Kenneth Gleason was found guilty of first-degree murder on April 26 for carrying out a four-day killing spree which resulted in two Black men dead, The Advocate reported.

The 27-year-old Baton Rouge dishwasher’s “reign of terror,” as prosecutors called it, first took aim at the  home of a Black family on September 11, 2017.

It is was reported that he searched “aggravated assault on property” on the internet after shooting up the house, Special Agent Jeff Methvin testified last Wednesday said.

Bruce Cofield was killed on the following day, when Gleason used his 9mm gun with a silencer while he Cofield sat at a bus stop.

Gleason did an Internet search for “define murder,” “best Nazi generals,” and “serial killer” on Cofield’s day of death, according to The Atlanta Black Star.

On September 14, he gunned down Donald Smart, a 53-year-old Black man, on his way to work at the Louie’s Cafe at the Louisiana State University’s campus.

Finally, on September 16, Gleason got detained and booked.

Despite his shooting victims being Black, Gleason was not charged with a hate crime. Assistant District Attorney Michelle Fulton said, “The timing of these searches is very important,” alluding his sudden interest in Nazism after committing murder.

Gleason’s family hugged and cried amongst themselves after hearing the verdict as they sat in the front row, behind Gleason and his attorneys.