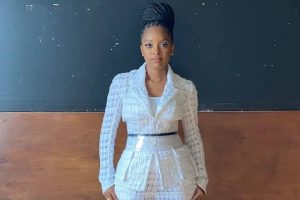 As the work of activist Tamika Mallory continues to make her more of a public figure, rapper Mysonne is coming to her defense against claims of her being a “clout chaser.”

Mallory called for justice during her recent appearance at the Grammys where she shared a powerful message during Lil Baby’s performance of his song The Bigger Picture. “It’s a state of emergency, it’s been a hell of a year, hell for over 400 years,” she said on stage, as noted by HuffPost. “My people it’s time we stand, it’s time we demand the freedom that this land promises.”

Shortly after her Grammy debut, Mallory was seen in a Cadillac commercial as part of their Audacity of Blackness campaign. While the activist only appeared to be expanding her portfolio to some, many others called her out for allegedly selling out and chasing fame.

As a result of her Grammy’s performance, Mallory was called out by Samaria Rice, the mother of Tamir Rice. “Look at this clout chaser,” Rice said in a Facebook post captured by Insider. “Did she lose something in this fight i don’t think so. That’s the problem they take us for a joke that’s why we never have justice cause of sh*t like this.” Rice then teamed up with Lisa Simpson, the mother of Richard Rishner, in releasing a joint statement where they accused Mallory and other activists of using the Black Lives Matter movement for their own personal gain while bringing no real justice to the police killings of their slain children.

White Supremacy is A structure Controlled by billionaires who’s job is to keep it going, You can’t dismantle it with poor people who’s Hobby is to fight it. Activism is work!! Lifetime work and Activist have to pay bills..Sorry 🤷🏾‍♂️

But rapper Mysonne took to social media to defend his podcast co-host. “White Supremacy is A structure Controlled by billionaires who’s job is to keep it going,” Mysonne tweeted. “You can’t dismantle it with poor people who’s Hobby is to fight it. Activism is work!! Lifetime work and Activist have to pay bills..Sorry,”

However, the For The Record: Chasing Freedom podcast host faced criticism for attempting to defend his co-host. “I’m sure there are better ways to pay bills than doing Cadillac commercials A structure Controlled by billionaires,” one Twitter user said in response.

Mallory has yet to respond to the shade but continues to promote her advocacy work. She celebrated the last day of Women’s History Month by highlighting her appearance in the Cadillac commercial with the company that “committed $10 million to racial justice organizations with the first $1 million already donated to the NAACP Legal Defense Fund.”