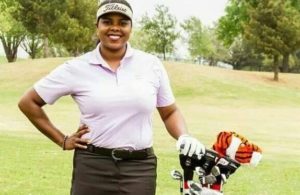 A noteworthy milestone was recently reached in the golf world. According to the PGA of America, the world’s largest sports organization comprised of nearly 29,000 PGA professionals— Maulana Dotch, was named general manager at Hermann Park Golf Course in Houston. Additionally, Dotch became the first African American woman PGA Member to serve as a general manager of a golf facility.

“The PGA of America is proud of Maulana Dotch for earning this prestigious leadership position in golf management, while achieving another impressive milestone in her successful career,” PGA President Jim Richerson said online. “As a groundbreaking PGA Member, Maulana serves as a role model for women and girls and a source of inspiration for all who aspire to become PGA Members, as well as pursue careers throughout the golf industry.”

In KHOU’s interview, Dotch said that she wants girls to see they can be general managers of a golf facility and do the job.

“This is nothing that’s out of your range,” Dotch said in the interview with KHOU.

Although it may be uncommon for a woman of color to excel in golf, the sport had been on Dotch’s radar before her college days. The African American Golfer’s Digest said that at the age of 12, Dotch’s father began to teach her golf, along with her three brothers. It was added that Dotch was immediately attracted to the sport. She played it at Irving High School, located in Irving, Texas.