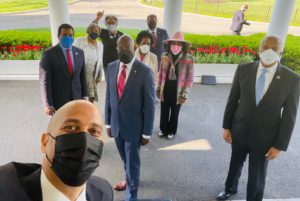 Some of the members of the Congressional Black Caucus are prioritizing voting rights, saying it is under attack by Republicans.

NewsOne and POLITICO reported that Rep. Anthony Brown (D-MD) said the right to vote needs to be restored due to bills throughout the nation trying to undermine Black people’s democracy.

The For the People Act, better known as H.R. 1 and inspired by the late Rep. John Lewis, is a bill Democratic Congresspeople want to enact that will expand voting rights and change how campaign finance laws reduce the influence of money in politics.

As BLACK ENTERPRISE previously reported, one of the main offenders of infringing on voting rights is Georgia, which added strict voting laws like prohibiting voters from passing out free refreshments such as water.

I certainly think our focus ought to be on [the Lewis bill] and voting rights,” Brown said. “You would think that that would provide a real good opportunity for a handful of Democratic senators who want to hold onto the filibuster [to say] ‘Yes, we can do it on this John Lewis Voting Rights [Act].’”

“If you want to play into [Republican] hands, you do nothing at all and let them pass redistricting maps that absolutely don’t have to be pre-cleared where they can do whatever the hell they please, and they can discriminate at will,” Veasey said to Politico. “Or, you step up your game, and you do what needs to be done.”

Initially, H.R.1 was introduced on January 3, 2019, in response to the Democratic majority in the House. The House passed the bill on March 8, 2019, but it was blocked by a then-Republican-controlled Senate, under then Senate Majority Leader Mitch McConnell.

Now that Democrats hold a majority in the House and the Senate, the party must reintroduce the bill to ensure the bill accommodates different states laws.

Black Democrats want the name bill to be named after the late Lewis, who fought for voting rights from his protesting days with Dr. Martin Luther King Jr.

The Lewis bill aims at restoring key sections of the 1965 Voting Rights Act, which required certain states to get pre-approval changes onto their electoral maps to ensure there is not racial discrimination.

However, the Supreme Court removed the Voting Rights Act’s  protections and pre-approval formula in 2013, which caught the ire of many voting rights advocates.

By September,  Black lawmakers said Congress needs to get voting rights legislation to Biden’s desk because most states will begin enacting new maps around then. Others are already beginning the process.

Members of the CBC have teamed up with leaders of two panels that have jurisdiction over election issues to strengthen the language of the Lewis bill.