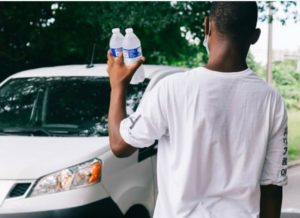 Atlanta police might give citations to parents of “water boys,” children who sell bottled water on busy intersections during the hot season.

With summer approaching, some Black children make use of their allowances, buying bottled water to resell them for a profit. However, the commotion it causes for busy drivers is a subject for debate, which law enforcers want to prevent.

The solution for handling reckless water boys without the need of arresting them is to attack their primary source of income–their parents.

RELATED CONTENT: A GROUP OF TEENS IN BALTIMORE LAUNCH THEIR OWN BOTTLED WATER BRAND

As reported by Atlanta’s WSB-TV, some water boys are said to have been aggressively targeting drivers, which could lead to accidents.

A day in a life of a water boy is a lucrative and, technically, a legal side hustle in Atlanta despite growing concerns for public safety. An individual boy could make between $100 and $500 a day.

However, the job is admittedly dangerous: children have to quickly advance toward stopped cars on the highway, make a sales pitch, and hastily collect their money and goods before the light turns green.

Some altercations do occur, leaving some teens killed in the process. Jalanni Press, 18,  was gunned down in June 2020. His mother, Tomeke Press, started an online petition to ban water boys in Atlanta, 11 Alive reported.

As of right now, citing parents is a police suggestion, but talks about prohibiting boys from selling water have been in the works.

Some board members of Georgia’s Community Improvement District (CID), such as Herbert Ames, the CID treasurer and senior vice president in the Southeast for the retail real estate company EDENS, have voiced their concerns.

“I would love any clarification on selling water illegally in the streets of Atlanta: how that is not classified as illegal behavior?” Ames told Reporter Newspapers. “It is a matter of time before someone is killed, either by people being hit, one of these kids shooting someone, or a passerby in a car who’s carrying a weapon firing upon them. It is unacceptable this continues…and to say it’s not criminal for them to be doing this in the middle of the road, it’s unacceptable.”